St. Colette was born 13 January 1381, at Corbie in Picardy, France. She was given the name Nicolette Boellet, but called Colette. Colette joined successively the Bequines, the Benedictines, and the Urbanist Poor Clares. She the second Holy Mother and reformer reformer of the Franciscan Order of the Colettine Poor Clares (Clarisses). she experienced the great visions which would move her to action. In her first vision, Colette witnessed the moral destruction of the world, a vision which left her frightened and moved. Later, had another vision in which she saw Saint Francis of Assisi come before the Lord, and kneeling down, he begged, “Lord, give me this woman for the reform of my Order”

Saint Colette, remembering the vision of the Lord depicting the moral decline of society and the Church, never ceased praying for the sanctity of the Church and it’s leaders. In response, she was continuously plagued by the Devil, who visited upon her torture and temptation. She was frequently surrounded by stinging insects, who swarmed around her, stinging her repeatedly. Decomposing corpses of criminals and heretics would miraculously appear in her cell, even while she was walled in. Saint Colette further would further undergo physical torture and the hands of demons, leaving her bruised, broken, and exhausted. St. Colette once complained to Our Lord that the demons prevented her from praying. "Cease, then," said the devil to her, "your prayers to the great Master of the Church, and we will cease to torment you; for you torment us more by your prayers than we do you."

She died at Ghent, Belgium on 6 March, 1447. She was beatified on 23 January, 1740, and later canonized on 24 May, 1807. She is known as St. Colette of Corbie. She was not only a woman of sincere piety, but also intelligent and energetic, and exercised a remarkable moral power over all her associates. She was very austere and mortified in her life, for which God rewarded her by supernatural favours and the gift of miracles. 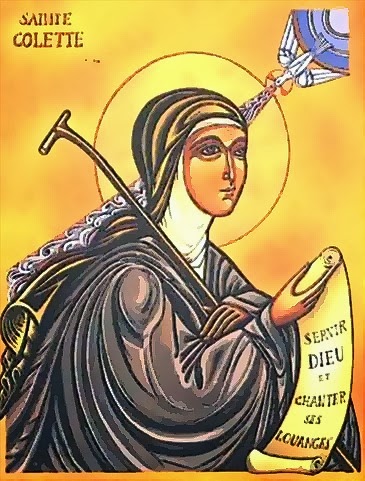 Saint Colette serves as a reminder for us that times of struggle and suffering can lead to redemption and conversion. In her words, "If there be a true way that leads to the Everlasting Kingdom, it is most certainly that of suffering, patiently endured." These words, modelled after the life of Jesus Christ, His suffering for us, call us to patience in this world, and life everlasting in the next.

"We must faithfully keep what we have promised.
If through human weakness we fail,
we must always without delay arise again
by means of holy penance,
and give our attention to leading a good life
and to dying a holy death.
May the Father of all mercy,
the Son by his holy passion,
and the Holy Spirit,
source of peace, sweetness and love,
fill us with their consolation.
Amen."