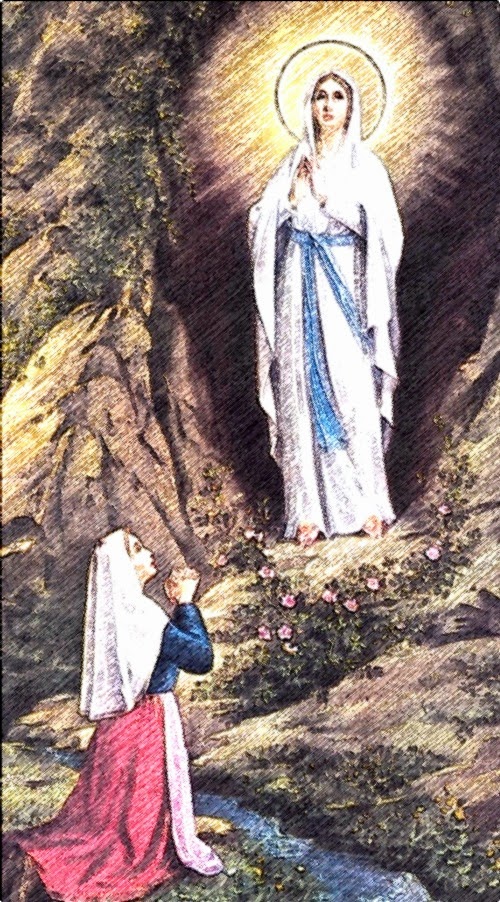 A optional memorial of Our Lady of Lourdes, who first appeared on 11 February 1858 to Marie-Bernarde Soubirous, 14 (Saint Bernadette) at a grotto near the Soubirous home in southern France. While she was out gathering firewood with her sister and a friend at the grotto of Massabielle outside Lourdes, Bernadette claimed to see the first of 18 visions of what she termed "a small young lady" standing in a niche in the rock.There were 18 apparitions of Our Lady to Bernadette between February and July 1858. On 25 March 1858 (Solemnity of the Annunciation of the Lord), the 16th apparition, our lady revealed herself to Bernadette as the Blessed Virgin Mary, the Immaculate Conception and known to us as Our Lady of Lourdes.

On 18 January 1862, Bishop Laurence, the Bishop of Tarbes, gave the solemn declaration: “We are inspired by the Commission comprising wise, holy, learned and experienced priests who questioned the child, studied the facts, examined everything and weighed all the evidence. We have also called on science, and we remain convinced that the Apparitions are supernatural and divine, and that by consequence, what Bernadette saw was the Most Blessed Virgin. Our convictions are based on the testimony of Bernadette, but above all on the things that have happened, things which can be nothing other than divine intervention”.

Pope John Paul II visited Lourdes three times and Pope Benedict XVI made a visit to Lourdes on 15 September 2008, to commemorate the 150th anniversary of the apparitions of 1858.

11 February was proclaimed World Day of the Sick by Pope John Paul II. Therefore, it would be appropriate to celebrate the Sacrament of the Anointing of the Sick on this day during a Mass or Liturgy of the Word. (The Sacrament of the Anointing of the Sick is only to be given to "those of the faithful whose health is seriously impaired by sickness or old age", Roman Ritual. This Sacrament must not be given indiscriminately to all who take part in Masses for the sick.)

The first to witness Our Lady's presence at Lourdes was little Bernardette Soubirous, who became her intrepid messenger. Although she is buried far away in Nevers in the north of France, her body totally incorrupt, as if she were asleep.

Grant us, O merciful God, protection in our weakness, that we, who keep the Memorial of the Immaculate Mother of God, may with the help of her intercession, rise up from our iniquities. Through our Lord Jesus Christ, your Son, who lives and reigns with you in the unity of the Holy Spirit, one God, for ever and ever. AMEN.

Email ThisBlogThis!Share to TwitterShare to FacebookShare to Pinterest
Labels: Optional Memorial, Our Lady of Lourdes, World Day of the Sick