Ascension of the Lord (Solemnity)

The Solemnity of the Ascension falls on Thursday, 9 May 2013 (it may be transferred to Sunday, 12 May 2013 in some countries). The celebration marks Christ Jesus's bodily ascension into heaven after 40 days from Easter Sunday, when He rose from the dead.  Christ Jesus, takes his place at God’s right hand so that he can pour out the promise of the Father, the Holy Spirit, upon his disciples. The 40th day after Easter Sunday always fall on a Thursday.

Go and Teach All Nations,
Says the Lord;
I Am with You Always,
until the End of the World. 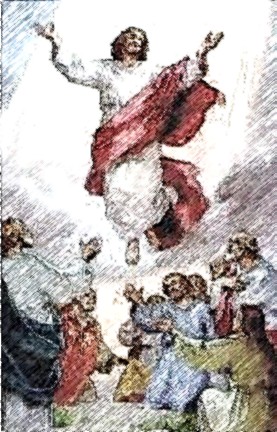 Ephesians 4:10
10 He who descended is the very one who ascended higher than all the heavens, in order to fill the whole universe.

Mark 16:14-20
14 Later Jesus appeared to the Eleven as they were eating; he rebuked them for their lack of faith and their stubborn refusal to believe those who had seen him after he had risen.
15 He said to them, “Go into all the world and preach the gospel to all creation. 16 Whoever believes and is baptized will be saved, but whoever does not believe will be condemned. 17 And these signs will accompany those who believe: In my name they will drive out demons; they will speak in new tongues; 18 they will pick up snakes with their hands; and when they drink deadly poison, it will not hurt them at all; they will place their hands on sick people, and they will get well.”
19 After the Lord Jesus had spoken to them, he was taken up into heaven and he sat at the right hand of God. 20 Then the disciples went out and preached everywhere, and the Lord worked with them and confirmed his word by the signs that accompanied it.

Luke 24:50-53
The Ascension of Jesus
50 When he had led them out to the vicinity of Bethany, he lifted up his hands and blessed them. 51 While he was blessing them, he left them and was taken up into heaven. 52 Then they worshiped him and returned to Jerusalem with great joy. 53 And they stayed continually at the temple, praising God.

Acts 1:1-11
Jesus Taken Up Into Heaven
1 In my former book, Theophilus, I wrote about all that Jesus began to do and to teach 2 until the day he was taken up to heaven, after giving instructions through the Holy Spirit to the apostles he had chosen. 3 After his suffering, he presented himself to them and gave many convincing proofs that he was alive. He appeared to them over a period of forty days and spoke about the kingdom of God. 4 On one occasion, while he was eating with them, he gave them this command: “Do not leave Jerusalem, but wait for the gift my Father promised, which you have heard me speak about. 5 For John baptized with water, but in a few days you will be baptized with the Holy Spirit.”
6 Then they gathered around him and asked him, “Lord, are you at this time going to restore the kingdom to Israel?”
7 He said to them: “It is not for you to know the times or dates the Father has set by his own authority. 8 But you will receive power when the Holy Spirit comes on you; and you will be my witnesses in Jerusalem, and in all Judea and Samaria, and to the ends of the earth.”
9 After he said this, he was taken up before their very eyes, and a cloud hid him from their sight.
10 They were looking intently up into the sky as he was going, when suddenly two men dressed in white stood beside them. 11 “Men of Galilee,” they said, “why do you stand here looking into the sky? This same Jesus, who has been taken from you into heaven, will come back in the same way you have seen him go into heaven.”

"Today our Lord Jesus Christ ascended into heaven; let our hearts ascend with him. Listen to the words of the Apostle: If you have risen with Christ, set your hearts on the things that are above where Christ is, seated at the right hand of God; seek the things that are above, not the things that are on earth. For just as he remained with us even after his ascension, so we too are already in heaven with him, even though what is promised us has not yet been fulfilled in our bodies."
~ The great western Bishop Augustine ~

Philippians 2:6-11
6 Who, being in very nature God,
did not consider equality with God something to be used to his own advantage;
7 rather, he made himself nothing
by taking the very nature of a servant,
being made in human likeness.
8 And being found in appearance as a man,
he humbled himself
by becoming obedient to death—
even death on a cross!9 Therefore God exalted him to the highest place
and gave him the name that is above every name,
10 that at the name of Jesus every knee should bow,
in heaven and on earth and under the earth,
11 and every tongue acknowledge that Jesus Christ is Lord, to the glory of God the Father.

For through the law I died to the law so that I might live for God. I have been crucified with Christ and I no longer live, but Christ lives in me. The life I now live in the body, I live by faith in the Son of God, who loved me and gave himself for me.

John 15:4
Remain in me, as I also remain in you. No branch can bear fruit by itself; it must remain in the vine. Neither can you bear fruit unless you remain in me.
Posted by Stanley at 18:50

Email ThisBlogThis!Share to TwitterShare to FacebookShare to Pinterest
Labels: Ascension, Ascension of the Lord, Lord, Solemnity