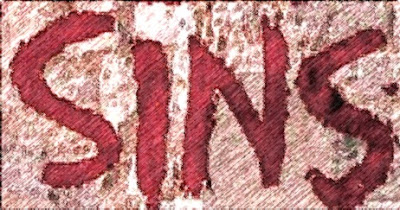 There are two general classes of sins, original and actual. Original sin is the kind of sin that we inherit from Adam. No person exists who does not sin, however holy he may be. The only human being who was created without sin, and never committed sin, was the Blessed Virgin; this was a special privilege bestowed on her because she was to be the Mother of our Saviour.

On account of the sin of Adam, we, his descendants, come into the world deprived of sanctifying grace and inherit his punishment, as we would have inherited his gifts had he been obedient to God.
"Therefore as through one man sin entered into the world and through sin death, and thus death has passed into all men" (Rom. 5:12).
This sin in its is called original sin. It is the state in which every descendant of Adam comes into the world, totally deprived of grace, through inheriting the punishment, not of Adam's personal sin, but of his sin as head of the human race. This sin is called original because it comes down to us through our origin, from Adam.
Thus all men are born in sin, that is, they are born without the friendship of God, and with no right to heaven. Original sin does not come to us from Eve. but from Adam alone, since God made him representative and head of the whole human race. Eve was punished for her disobedience, as Adam was, but did not pass on her guilt to all mankind. Our original sin comes from our first father.

Actual sin is any willful thought, desire, word, action, or omission forbidden by the law of God.

There are two kinds of actual sin: mortal sin and venial sin.

Mortal sin
Mortal sin is a grievous offense against the law of God. It is called mortal, or deadly, because it deprives the sinner of sanctifying grace, the supernatural life of the soul. Besides depriving the sinner of sanctifying grace, mortal sin makes the soul an enemy of God, takes away the merit of all its good actions, deprives it of the right to everlasting happiness in heaven, and makes it deserving of everlasting punishment in hell.
To make a sin mortal, these three things are necessary:
When one realizing what he is doing, still freely does it, he gives the matter deliberate consent. Therefore infants and insane cannot commit mortal sin; they cannot fully realize what they do.
Mortal sin is a great evil, the greatest evil in the world, a greater evil than disease, poverty, or war, because it separates us from God.

Mortal sin is the greatest evil in the world. It separates us from God. Because of our mortal sins, Jesus Christ suffered agonies and died on the cross. To strengthen our resolution not to commit sin, we should remember also that even a single mortal sin is enough to send us to hell.

Venial sin
Venial sin is a less serious offense against the law of God, which does not deprive the soul of sanctifying grace, and which can be pardoned even without sacramental confession.
A sin can be venial in two ways:
Grumbling when told by Your mother to open the window is not gravely wrong; it is a venial sin.
Stealing an expensive diamond ring is seriously wrong, but if the sinner took it in the belief that it was only a cheap imitation, the sin had not full consent, and is venial. If one eats meat on a day of abstinence, thinking it only a slight sin to do so; or if one in a sudden outburst of anger insults a companion seriously, he commits a venial sin for lack of sufficient reflection and consent.

Venial sin are impatience, slight faultfinding, lies that harm nobody. The word "venial" comes from the Latin venialis, meaning easily pardonable. Even the most just of mortals falls into venial sin again and again. God permits this to keep us humble. The most imperfect of mortals attains a very high degree of perfection as soon as he can avoid all deliberate venial sin: as soon as he does not commit any sin deliberately, with full advertence and consent.

Venial sin harms us by making us less fervent in the service of God, by weakening our power to resist mortal sin, and by making us deserving of God's punishments in this life or in purgatory. We can keep from committing sin by praying and by receiving the sacraments; by remembering that God is always with us; by recalling that our bodies are temples of the Holy Ghost; by keeping occupied with work or play; by promptly resisting the sources of sin within us; by avoiding the near occasions of sin.

We are prone to look upon venial sin as of no consequence, and to be careless about guarding against it, forgetting that it is second only in evil consequences to mortal sin. In Holy Scripture we see from many examples how God regards venial sin; even in this life He has punished it most severely. For only a slight doubt about God's mercy, because of the wickedness of his people, Moses was punished: he was not permitted to lead the Israelites into the Promised Land.
Posted by Stanley at 20:25