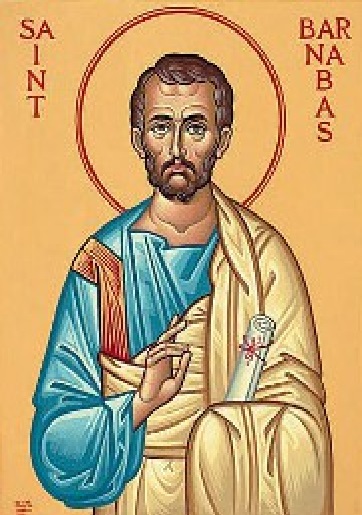 The Acts of the Apostles describes Barnabas as 'a good man, full of the Holy Spirit and of faith'. Though he is not one of the 12 apostles chosen by Jesus, is one of the 72 disciples of Christ. Saint Barnabas , a Levite Jew whose birth name was Joseph and born of Jewish parents on the island of Cyprus. Probably because of his success as a preacher he was given the name Barnabas, meaning “son of encouragement or consolation” by the community. He was known for his exceptional kindliness and personal sanctity, and his openness to pagans. .When Saul was preaching Christ as Saviour, had to flee from Jews in Damascus, he went to Jerusalem where the Christians did not want to approach him, being highly suspicious of the genuineness of his conversion as earlier Paul’s persecutions against Christians was a cause for doubt.. It was Barnabas who brought Saul to the leaders and guaranteed Saul’s conversion as real. Barnabas participated in the Council of Jerusalem, which dealt with the admission of gentiles into the Christian community, a crucial problem in early Christianity. Paul and Barnabas proposed that gentiles be allowed into the community without being circumcised.

Acts 4:36-37
36 Joseph, a Levite from Cyprus, whom the apostles called Barnabas (which means “son of encouragement”), 37 sold a field he owned and brought the money and put it at the apostles’ feet.


27 But Barnabas took him and brought him to the apostles. He told them how Saul on his journey had seen the Lord and that the Lord had spoken to him, and how in Damascus he had preached fearlessly in the name of Jesus.

Acts 14:8-18
In Lystra and Derbe
8 In Lystra there sat a man who was lame. He had been that way from birth and had never walked.9 He listened to Paul as he was speaking. Paul looked directly at him, saw that he had faith to be healed 10 and called out, “Stand up on your feet!” At that, the man jumped up and began to walk.
11 When the crowd saw what Paul had done, they shouted in the Lycaonian language, “The gods have come down to us in human form!” 12 Barnabas they called Zeus, and Paul they called Hermes because he was the chief speaker. 13 The priest of Zeus, whose temple was just outside the city, brought bulls and wreaths to the city gates because he and the crowd wanted to offer sacrifices to them.
14 But when the apostles Barnabas and Paul heard of this, they tore their clothes and rushed out into the crowd, shouting: 15 “Friends, why are you doing this? We too are only human, like you. We are bringing you good news, telling you to turn from these worthless things to the living God, who made the heavens and the earth and the sea and everything in them. 16 In the past, he let all nations go their own way. 17 Yet he has not left himself without testimony: He has shown kindness by giving you rain from heaven and crops in their seasons; he provides you with plenty of food and fills your hearts with joy.” 18 Even with these words, they had difficulty keeping the crowd from sacrificing to them.

Barnabas and Saul, together with John Mark, enbarked on a evangelisation journey called Paul’s First Missionary Journey. They went first to preach the Gospel in Barnabas’ homeland, Cyprus, and then moved to Perge in Pampyhilia on the mainland which is today, Southern Turkey. On their return to Antioch, "There arose a sharp contention between them. Barnabas took John Mark with him and sailed away to Cyprus".


Division over John Mark
36 Then after some days Paul said to Barnabas, “Let us now go back and visit our brethren in every city where we have preached the word of the Lord, and see how they are doing.” 37 Now Barnabas was determined to take with them John called Mark. 38 But Paul insisted that they should not take with them the one who had departed from them in Pamphylia, and had not gone with them to the work. 39 Then the contention became so sharp that they parted from one another. And so Barnabas took Mark and sailed to Cyprus;

Barnabas is remembered not only for his missionary zeal but for his openness, as a Jew, to the Gentiles and for his seeing in the former fanatical Pharisee, Saul, his potential to be a great apostle for Christ and the Gospel. Barnabas was tortured and stoned to death in Salamis. Saint Barnabas reputedly died in 61 A.D. and his feast is celebrated on 11 June. Patron of Cyprus, Antioch, against hailstorms, invoked as peacemaker.

O Lord God Almighty,
who didst endue thy holy Apostle Barnabas
with singular gifts of the Holy Ghost;
Leave us not, we beseech thee,
destitute of thy manifold gifts,
nor yet of grace to use them always
to thy honour and glory;
through Jesus Christ our Lord.
Amen.

Psalm
Gospel
Posted by Stanley at 02:04