Solemnity of the Annunciation of the Lord 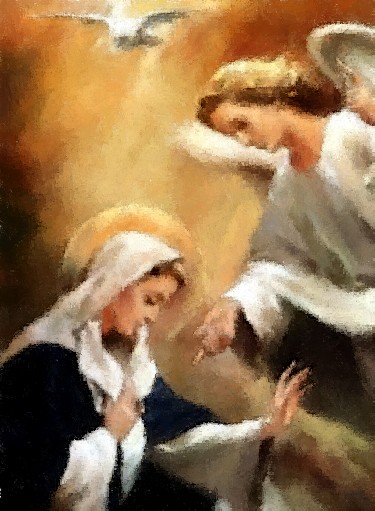 "The mystery of Mary's cooperation in God's plan."
God became "like us in all things except sin"
at the moment of His conception in Mary's womb.


Mary, immaculately conceived,
was the means through which God became Man,
The Word made flesh.

In the sixth month of Elizabeth’s pregnancy, God sent the angel Gabriel to Nazareth, a town in Galilee, to a virgin pledged to be married to a man named Joseph, a descendant of David. The virgin’s name was Mary. The angel went to her and said, “Greetings, you who are highly favored! The Lord is with you.”
Mary was greatly troubled at his words and wondered what kind of greeting this might be. But the angel said to her, “Do not be afraid, Mary; you have found favor with God. You will conceive and give birth to a son, and you are to call him Jesus. He will be great and will be called the Son of the Most High. The Lord God will give him the throne of his father David, and he will reign over Jacob’s descendants forever; his kingdom will never end.”
“How will this be,” Mary asked the angel, “since I am a virgin?”
The angel answered, “The Holy Spirit will come on you, and the power of the Most High will overshadow you. So the holy one to be born will be called the Son of God. Even Elizabeth your relative is going to have a child in her old age, and she who was said to be unable to conceive is in her sixth month. For no word from God will ever fail.”
“I am the Lord’s servant,” Mary answered. “May your word to me be fulfilled.” Then the angel left her.

The "angelic salutation" of the Archangel Gabriel to Mary, 'Hail, thou who art highly favored. The Lord is with thee." which became the the origin of repeated "Hail Mary" prayer of the Rosary. Mary's response to God's will, "Let it be done to me according to thy word." Her exultant hymn, the Magnificat, has been part of the Church's liturgy of the hours, at Vespers (evening prayer), and has been repeated nightly in churches, convents and monasteries for many centuries.

And Mary said:
“My soul exalts the Lord,
And my spirit has rejoiced in God my Savior.
“For He has had regard for the humble state of His bondslave;
For behold, from this time on all generations will count me blessed.
“For the Mighty One has done great things for me;
And holy is His name.
“And His mercy is upon generation after generation
Toward those who fear Him.
“He has done mighty deeds with His arm;
He has scattered those who were proud in the thoughts of their heart.
“He has brought down rulers from their thrones,
And has exalted those who were humble.
“He has filled the hungry with good things;
And sent away the rich empty-handed.
“He has given help to Israel His servant,
In remembrance of His mercy,
As He spoke to our fathers,
To Abraham and his descendants forever.”


The Catechism of the Catholic Church on Article 3 of the Creed, "He was conceived by the power of the Holy Spirit, and was born of the Virgin Mary" (#456-483) http://www.vatican.va/archive/ENG0015/__P1J.HTM

10 Again the LORD spoke to Ahaz,
11 "Ask a sign of the LORD your God; let it be deep as Sheol or high as heaven."
12 But Ahaz said, "I will not ask, and I will not put the LORD to the test."
13 And he said, "Hear then, O house of David! Is it too little for you to weary men, that you weary my God also?
14 Therefore the Lord himself will give you this sign: the virgin shall be with child, and bear a son, and shall name him Immanuel.

10 Take counsel together, but it will come to nought; speak a word, but it will not stand, for God is with us.

Email ThisBlogThis!Share to TwitterShare to FacebookShare to Pinterest
Labels: Annunciation, Annunciation of the Lord, Lord, Solemnity