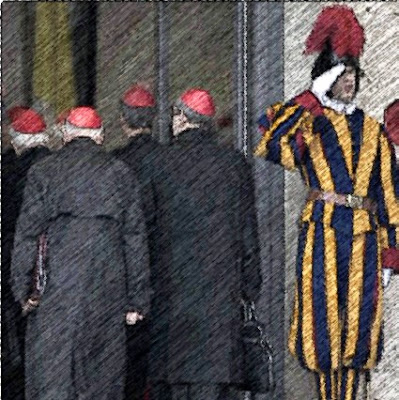 60 of the cardinals are European, 19 Latin American, 14 North American, 11 African, 10 Asian and one Australian. The conclave of 115 cardinals who will choose the 266th pope, successor to Pope Benedict will begin on 12 March, the Vatican said on Friday. The decision was made after five days of closed-door debate, coming to a decision to begin their secret votes at Sistine Chapel on the afternoon of next Tuesday following a Mass in St Peter's Basilica in the morning. The 115 red-capped prelates under the age of 80 were either appointed by John Paul II or Benedict XVI.

The voting process through balloting and burning of ballots, will continue until one man of God receives a two-thirds majority, or 77 votes. He will then be asked to accept the position and, if he does, will be revealed to the thousands of pilgrims waiting outside in St Peter's square. The last 6 previous popes all have been elected within 4 days, with Benedict in 2005 becoming pontiff in barely 24 hours. In making sure they can all return to their dioceses in time to lead Easter celebrations, the cardinals have decided to make the decision another quick one due to limited time available as the church of 1.2 billion Catholics needs a Supreme Pontiff by Easter.