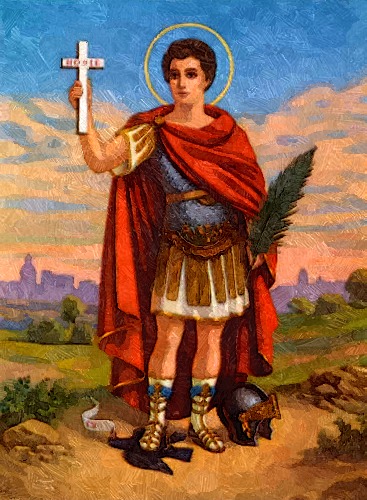 Saint Expedite was a Roman soldier, believed to have lived in the fourth century. He came to know Christianity decided to convert and devote his life Christianity faith. At the time he made that decision the devil appeared before him in the form of a crow and demanded that he delay his decision to convert to the Christian faith until the next day (tomorrow). Saint Expedite refused to delay and firmly stated he would become a Christian today (same day).

Thus image shows Saint Expedite dressed in Roman soldier clothing stepping on a crow. He is killing procrastination. “Hodie” is the Latin word for “today”. The word “Hodie” can be seen on the cross he is holding. “Cras” is the Latin word for “tomorrow”. The word “Cras” can be seen on the banner connected to the crow. Basically this sends out a powerful message; the saint is crushing tomorrow and replacing it with today.

Saint Expedite is patron saint for urgent matters and speedy needs or delivery. He is also the saint for against procrastination and emergencies where immediate solution to a situation is needed. Many have seek his help in seeking job, financial distress and legal issues. The palm branch he holds in one hand is a symbol of martyrdom. Therefore, 14 April marks the feast day for Saint Expedite. Saint Expedite is extremely popular in Brazil. Like Saint Christopher, Saint Valentine and others related saints, Saint Expedite feast has been removed from the official calendar of Roman Catholic saints due to unverifiable death date. Wednesday is most favorable with Saint Expedite.