My Father is working still, and I am working 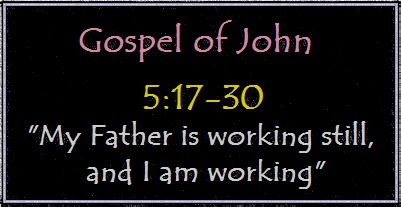 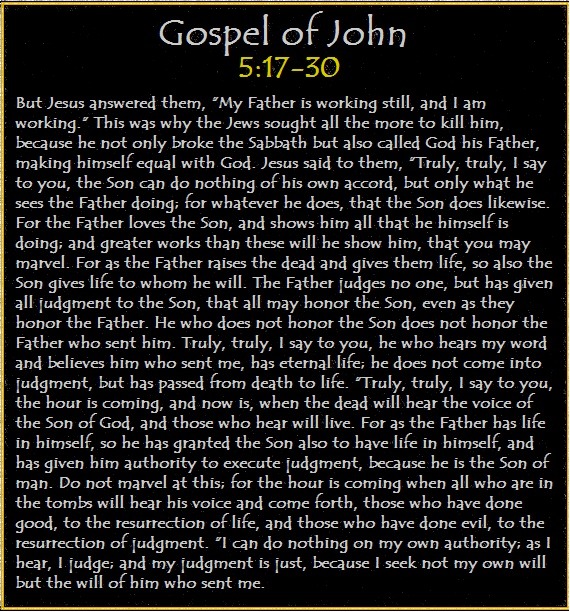 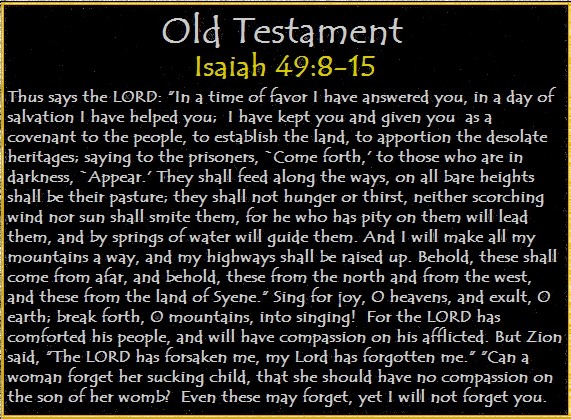 Who can claim authority and power over life and death itself? Jesus not only made such a claim, he showed God's power to heal and restore people to wholeness of life. He also showed the mercy of God by releasing people from their burden of sin and guilt. He even claimed to have the power to raise the dead to life and to execute judgment on all the living and dead. The Jewish authorities were troubled with Jesus' claims and looked for a way to get rid of him. He either had to be a mad man and an imposter or who he claimed to be - God's divine son. Unfortunately, they could not accept Jesus' claim to be the Messiah, the anointed one sent by the Father to redeem his people. They sought to kill him because he claimed an authority and equality with God which they could not accept. They failed to recognize that this was God's answer to the long-awaited prayers of his people: "In a time of favor I have answered you, in a day of salvation I have helped you" (Isaiah 49:8).

A "covenant" to the people
Jesus was sent by the Father as "a covenant to the people" to reconcile them with God and restore to them the promise of paradise and everlasting life. Jesus' words and actions reveal God's mercy and justice. Jesus fulfills the prophecy of Isaiah when he brings healing, restoration, and forgiveness to those who accept his divine message.

The religious authorities charged Jesus as a Sabbath-breaker and a blasphemer. They wanted to kill Jesus because he claimed equality with God - something they thought no mortal could say without blaspheming. Little did they understand that Jesus was both human and divine - the eternal Son with the Father and the human son, conceived by the Holy Spirit in the womb of Mary. Jesus answered their charge of breaking the Sabbath law by demonstrating God's purpose for creation and redemption - to save and restore life. God's love and mercy never ceases for a moment. Jesus continues to show the Father's mercy by healing and restoring people, even on the Sabbath day of rest. When the religious leaders charged that Jesus was making himself equal with God, Jesus replied that he was not acting independently of God because his relationship is a close personal Father-Son relationship. He and the Father are united in heart, mind, and will. The mind of Jesus is the mind of God, and the words of Jesus are the words of God.

The unity of love and obedience
Jesus also states that his identity with the Father is based on complete trust and obedience. Jesus always did what his Father wanted him to do. His obedience was not just based on submission, but on love. He obeyed because he loved his Father. The unity between Jesus and the Father is a unity of love - a total giving of oneself for the sake of another. That is why their mutual love for each other is perfect and complete. The Son loves the Father and gives himself in total obedience to the Father's will. The Father loves the Son and shares with him all that he is and has. We are called to submit our lives to God with the same love, trust, and obedience which Jesus demonstrated for his Father.

If we wish to understand how God deals with sin and how he responds to our sinful condition, then we must look to Jesus. Jesus took our sins upon himself and nailed them to the cross. He, who is equal in dignity and stature with the Father, became a servant for our sake to ransom us from slavery to sin. He has the power to forgive us and to restore our relationship with God because he paid the price for our sins.

Jesus offers us abundant, life, peace, and joy
Jesus states that to accept him is life - a life of abundant peace and joy with God. But if we reject him, then we freely choose for death - an endless separation with an all-loving and merciful God. Do you want the abundant life which Jesus offers? Believe in him, the living Word of God, who became a man for our sake and our salvation, and reject whatever is false and contrary to the Gospel - the good news he came to give us.

Lord Jesus, increase my love for you and unite my heart and will with yours, that I may only seek and desire what is pleasing to you.

source: From the desk of Don Schwager,
hosted by Kairos Europe and the Middle East
Posted by Stanley at 03:11