He will save his people from their sins 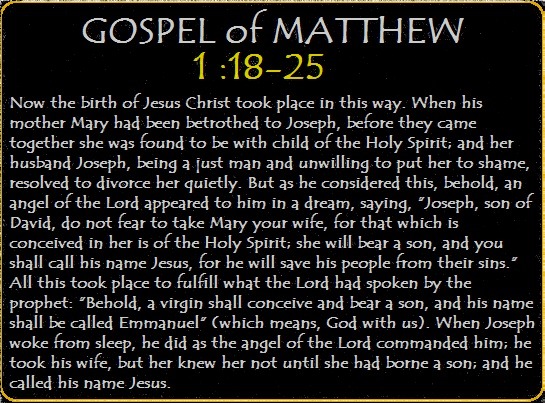 Do you hold on to the promises of God at all times, especially when you are faced with uncertainty or adversity?
The prophet Isaiah spoke words of hope in a hopeless situation for Israel. When Ahaz, the apostate king of Judah and heir to the throne of David (735 B.C.) was surrounded by forces that threatened to destroy him and his people, God offered him a sign to reassure him that God would not abandon the promise he made to David and his descendants. King Ahaz, however, had lost hope in God and refused to ask for a sign of favor. God, nonetheless, gave a sign to assure his people that he would indeed give them a Savior who would rule with peace and righteousness (Isaiah 7:11ff). Like the prophet Isaiah we are called “in hope to believe against hope” (Romans 4:18) that God can and will fulfill all his promises.

Mary was found to be with child of the Holy Spirit
Mary had to face an enormous challenge to her faith and trust in God and to the faith of her family and Joseph, the man she chose to marry. She was asked to assume a burden of tremendous responsibility. It had never been heard of before that a child could be born without a natural father. Mary was asked to accept this miraculous exception to the laws of nature. That required faith and trust in God and in his promises. Second, Mary was not yet married. Pregnancy outside of wedlock was not tolerated in those days. Mary was only espoused to Joseph, and such an engagement had to last for a whole year. She was asked to assume a great risk. She could have been rejected by Joseph, by her family, by all her own people. Mary knew that Joseph and her family would not understand without revelation from God. She nonetheless believed and trusted in God's promises.

Joseph believed the angel's message "that which is conceived in her is of the Holy Spirit"
Joseph, a just and God-fearing man, did not wish to embarrass or punish his espoused wife, Mary when he discovered that she was pregnant. To all appearances she had broken their solemn pledge to be faithful and chaste to one another. Joseph, no doubt took this troubling matter to God in prayer. He was not hasty to judge or to react with hurt and anger. God rewarded him not only with guidance and consolation, but with the divine assurance that he had indeed called Joseph to be the husband of Mary and to assume a mission that would require the utmost faith, confidence, and trust in Almighty God. Joseph believed in the divine message to take Mary as his wife and to accept the child in her womb as the promised Messiah.

A model of faith for us
Like Mary, Joseph is a model of faith for us. He is a faithful witness and servant of God's unfolding plan of redemption. Are you ready to believe in the promises of God, even when faced with perplexing circumstances and what seems like insurmountable problems? God has not left us alone, but has brought us his only begotten Son, our Lord and Savior Jesus Christ. Let us celebrate Christmas, the feast of the Incarnation, with joyful hearts and let us renew our faith and hope in God and in his redeeming work.

Lord Jesus, you came to save us from sin and the power of death. May I always rejoice in your salvation and trust in your divine plan for my life.

source: From the desk of Don Schwager,
hosted by Kairos Europe and the Middle East
Posted by Stanley at 17:36