Saint Expedite is the patron saint of those who hope for rapid solutions to problems, who wish to avoid or put an end to delays, and who want general or immediate financial success.Not much info is available on St. Expedite. The most popular and accepted one is about him being a Roman soldier (Expeditus) back in the days of the Christian persecution. During his service, he witnessed the martyrdom of several Christians at the hands of their persecutors, and was so taken by their humility, faith, and their requests that their persecutors be forgiven even as their persecutors tortured and killed them, that he chose to convert to Christianity - a choice that caused him to be imprisoned and ultimately killed for his beliefs. He is generally depicted as a Roman soldier stepping on a raven who is saying "Cras" (tomorrow) while holding a cross that says "Hodie" (today.) This comes from before St Expedite was martyred, Satan came to him in the form of a raven saying "Convert tomorrow, convert tomorrow," and St Expedite refused, insisting he be baptized a Christian that very same day and crushed the raven under his feet. The day after, he was martyred for his Christian faith. St.Expedite is the patron of emergencies, expeditious solutions, and against procrastination. 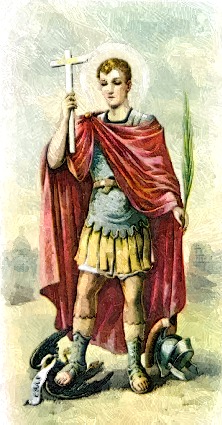 *** This prayer is to be said daily until your request is granted, Be sure to publish this prayer thanking Saint Expedite, so that his name and glory will grow.

Saint Expedite, you lay in rest. I come to you and ask that this wish be granted.

Say One Our Father and One Hail Mary and make the sign of the cross.
Posted by Stanley at 03:36