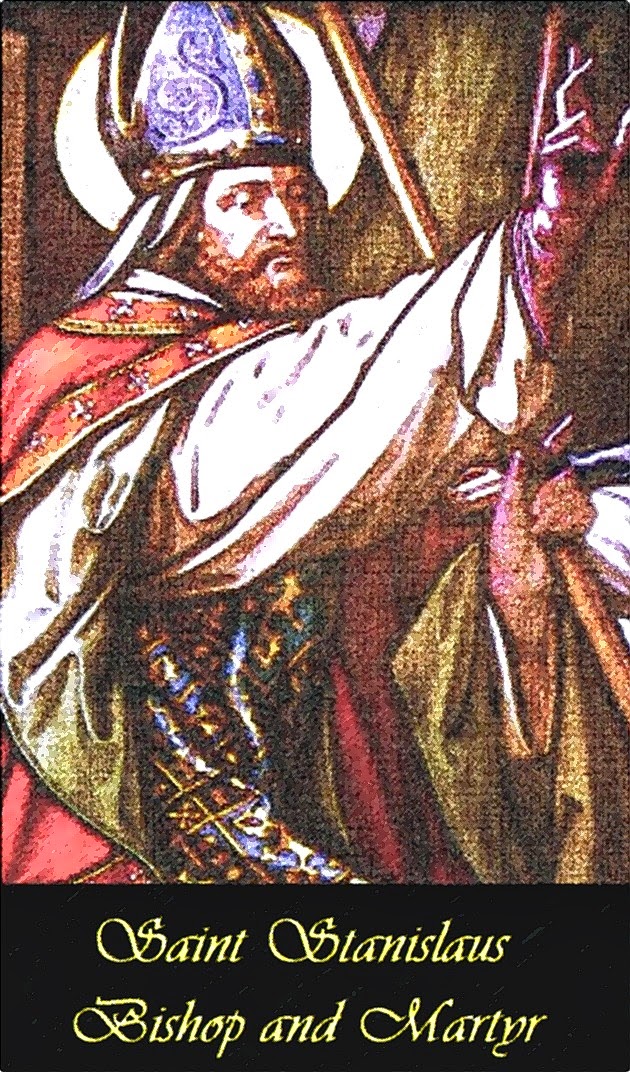 St. Stanislaus was the Bishop of Cracow, Poland. Stanislaus Szczepanowski was born to his noble parents, Belislaus and Bogna on 26 July 1030 in Szczepanow near Cracow and was educated at Gnesen and at Paris. Lambert Zula, Bishop of Cracow, ordained him priest and made him pastor of Czembocz near Cracow. After his ordination to the priesthood he was made a canon of the cathedral at Cracow as well as archdeacon and preacher. Upon the death of the bishop of Cracow, he was nominated bishop of the diocese by Pope Alexander II. In 1072 was named Bishop of Cracow. King Boleslaus II, who was becoming notorious for his violent and depraved lifestyle. Stanislaus spared neither tears nor prayers and admonitions to bring the king to lead a more Christian life. The king was furious and followed the bishop with his guards, some of whom he sent to kill the saint. These dared not obey, Boleslaus took matters into his own hands. He ambushed Stanislaus and struck him down with a sword during his celebration of Mass at the chapel of Saint Michael, Cracow on 8 May 1079. Stanislaus was acclaimed a martyr, while Boleslaus II lost his power, became a fallen monarch and left Poland. Stanislaus was canonized 1253 by Innocent IV at Assisi, Italy. St. Stanislaus is the patron saint for Cracow, Plock, Poland and soldiers in battle.


O God, for whose honour the Bishop Saint Stanislaus fell beneath the swords of his persecutors, grant we pray, that we may persevere strong in faith even until death. Through our Lord Jesus Christ, your Son, who lives and reigns with you in the unity of the Holy Spirit, one God, for ever and ever. AMEN.

Reading ~ Jeremiah 20:10-13
I hear the whisperings of many:
“Terror on every side!
Denounce! let us denounce him!”
All those who were my friends
are on the watch for any misstep of mine.
“Perhaps he will be trapped; then we can prevail,
and take our vengeance on him.”
But the LORD is with me, like a mighty champion:
my persecutors will stumble, they will not triumph.
In their failure they will be put to utter shame,
to lasting, unforgettable confusion.
O LORD of hosts, you who test the just,
who probe mind and heart,
Let me witness the vengeance you take on them,
for to you I have entrusted my cause.
Sing to the LORD,
praise the LORD,
For he has rescued the life of the poor
from the power of the wicked!

Gospel ~ John 10:31-42
The Jews picked up rocks to stone Jesus.
Jesus answered them, “I have shown you many good works from my Father.
For which of these are you trying to stone me?”
The Jews answered him,
“We are not stoning you for a good work but for blasphemy.
You, a man, are making yourself God.”
Jesus answered them,
“Is it not written in your law, ‘I said, ‘You are gods”‘?
If it calls them gods to whom the word of God came,
and Scripture cannot be set aside,
can you say that the one
whom the Father has consecrated and sent into the world
blasphemes because I said, ‘I am the Son of God’?
If I do not perform my Father’s works, do not believe me;
but if I perform them, even if you do not believe me,
believe the works, so that you may realize and understand
that the Father is in me and I am in the Father.”
Then they tried again to arrest him;
but he escaped from their power.

He went back across the Jordan
to the place where John first baptized, and there he remained.
Many came to him and said,
“John performed no sign,
but everything John said about this man was true.”
And many there began to believe in him.