Antiphon. - Who is she that cometh forth as the morning rising, fair as the moon, bright as the Sun, terrible as an army set in battle array?


My soul doth magnify the Lord.
And my spirit hath rejoiced in God my Saviour.
Because He hath regarded the humility of His handmaid: for behold from henceforth all generations shall call me blessed.
For He that is mighty hath done great things to me, and holy is His name. And His mercy is from generation unto generations to them that fear Him.
He hath showed might in His arm: He hath scattered the proud in the conceit of their heart.He hath put down the mighty from their seat: and hath exalted the humble.
He hath filled the hungry with good things: and the rich He hath sent empty away.
He hath received Israel His servant: being mindful of His mercy.
As He spoke to our fathers: to Abraham and to his seed forever.
Glory be to the Father, and to the Son, and to the Holy Ghost.
As it was in the beginning, is now, and ever shall be, world without end. Amen.


Antiphon. - Who is she that cometh forth as the morning rising, fair as the moon, bright as the sun, terrible as an army set in battle array?


V. O Mary conceived without sin.
R. Pray for us who have recourse to Thee.


Let us pray
O Lord Jesus Christ our Mediator with the Father, Who hast been pleased to appoint the Most Blessed Virgin, Thy Mother, to be our Mother also, and our Mediatrix with Thee, mercifully grant that whosoever comes to Thee seeking Thy favours may rejoice to receive all of them through her. Amen.


"Jesus, Mary and Joseph, I love You, Save Souls." 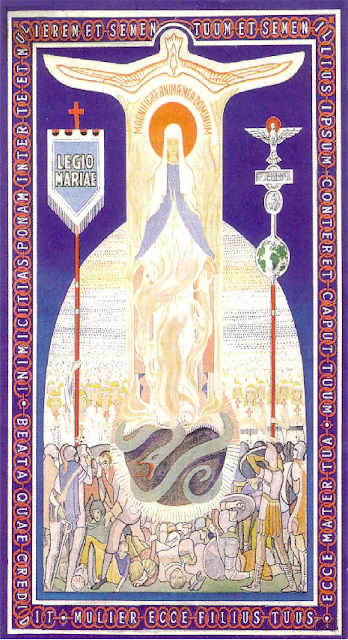 The Catena Legionis, which consists essentially of the Magnificat and some shorter prayers, is the daily prayer of the Legion of Mary, an association of Catholic laity who serve the Church on a voluntary basis. The Legion of Mary was founded by Frank Duff on September 7, 1921 in Dublin. His idea was to help Catholic lay people fulfill their baptismal promises and be able to live their dedication to the Church in an organised structure, supported by fraternity and prayer. The members of the Legion are primarily engaged in the performance of the Spiritual Works of Mercy rather than works of material aid.
Posted by Stanley at 01:05