Ponggal for the Three Magi

The Ponggal is observed yearly by Indian Catholics native or with ancestoral links of Pondicherry province Indians in Tamil Nadu, South India on the Epiphany of Our Lord which commorates the manifestation of of the majesty and divinity of the newborn Savior, our Lord Christ Jesus to the whole world, after being made known to the shepherds of Bethlehem, and is revealed to the Magi who have come from the East to adore Him. Jesus is given to us not as a privilege but as a gift of love and salvation for everyone who comes into the world . We are challenged to receive God's supreme gift and become, in turn, gifts to others. 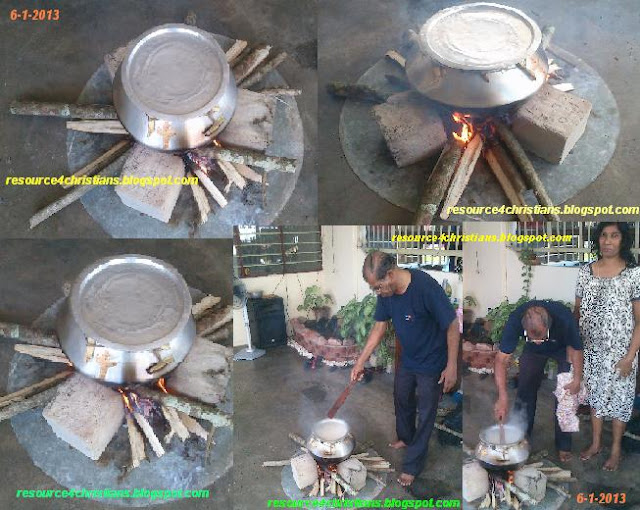 The word 'Pongal' basically means "boiling over". This Epiphany, I manage to capture picture of the ponggal at my relatives place in Taman Supreme, Prai, Penang, Malaysia. It has been a tradition in the family of the late Mr. and Mrs. Anthonysamy (originally was from Nellithope, Podicherry now known as Puducherry - புதுச்சேரி, India.) to carrying out this ponggal in homage of the 3 Magi revelation and manifestation on the birth of Christ Jesus, King of Israel also known as "Moonne Raja Ponggal" (3 Kings ponggal). On this day, sweet milk rice ("Ponggal Soru") is cook, drawing of Kolam and vegetarian food is served to whoever comes to the house.