When you have lifted up the Son of man 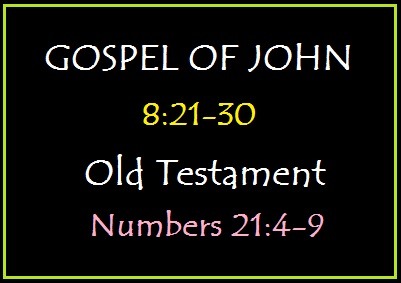 Do you know the healing power of the cross of Jesus Christ? When the people of Israel were afflicted with serpents in the wilderness because of their sin, God instructed Moses: "Make a fiery serpent, and set it on a pole; and every one who is bitten, when he sees it, shall live" (Numbers 21:8). The visible sign of the "fiery bronze serpent" being lifted up in the sight of the people reminded them of two important facts - sin leads to death and repentance leads to God's mercy and healing. The lifting up of the bronze serpent on a wooden pole points to Jesus Christ being lifted up on the wooden cross at Calvary where he took our sins upon himself to make atonement to the Father on our behalf. The cross of Christ broke the curse of sin and death and won pardon, healing, and everlasting life for all who believe in Jesus, the Son of God and Savior of the world.

When Jesus spoke about "going away" he was referring to his return in glory to his Father in heaven. Jesus warned his opponents that if they continued to disobey God's word and reject him, they would shut themselves off from God and die in their sins. Jesus' words echoed the prophetic warning given to Ezekiel (see Ezekiel 3:18 and 18:18) when God warned his people to heed his word before the time is too late. God gives us time to turn to him and to receive his grace and pardon, but that time is right now.

To sin literally means to miss the mark or to be off target. The essence of sin is that it diverts us from God and from our true purpose in life - to know the source of all truth and beauty which is God himself and to be united with God in everlasting joy. When Adam and Eve yielded to their first sin of disobedience, they literally tried to hide themselves from God's presence (Genesis 3:8-10). That is what sin does; it separates us from the One who is not only "all-seeing" and "ever present", but who is also "all loving" and "merciful" and eager to receive us. When God calls you to turn your gaze and attention towards him, do you try to hide yourself from his presence with other distractions and excuses that keep you from seeking him and listening to his voice?

The proof of God's love for us
Jesus went on to explain to people that if they could not recognize his voice when they heard his word, they would have the opportunity to recognize him when he is "lifted up" on the cross. Jesus pointed to the atoning sacrifice of his life on the cross as the true source of healing and victory over sin and reconciliation with God. The sacrifice of Jesus' life on the cross is the ultimate proof of God's love for us.

God so loved the world that he gave us his only Son, that whoever believes in him should not perish but have eternal life (John 3:16)

To fail to recognize who Jesus is and where he came from is to remain in darkness - the darkness of sin, ignorance, and unbelief. But if we look to Jesus and listen to his word of life and truth, then we will find the way to lasting peace and joy with God. The Lord Jesus invites each one of us to accept him as the Way, the Truth, and the Life. Our time here in this present world is very limited and short, but how we live it today has consequences not only for the present moment but for our eternal destiny as well. Which direction is your life headed in right now?