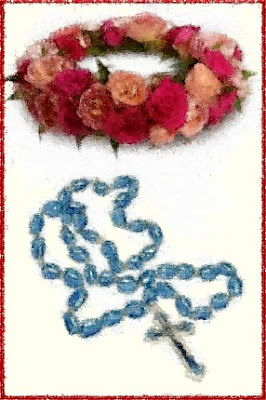 Ever since Blessed Alan de la Roche reestablished this devotion the voice of the people, which is the voice of God, called it the Rosary. The word Rosary means "Crown of Roses," that is to say that ever time people say the Rosary devoutly they place a crown of one hundred and fifty ---three red roses and sixteen white roses upon the heads of Jesus and Mary. Being heavenly flowers these roses will never fade or lose their exquisite beauty.

Our Lady has shown her thorough approval of the name Rosary; she had revealed to several people that each time they say a Hail Mary they are giving her a beautiful rose and that each complete Rosary makes her a crown of roses.

The well-known Jesuit, Brother Alphonsus Rodriguez, used to say his Rosary with such fervor that he often saw a red rose come out of his mouth at each Our Father and a white rose at each Hail Mary. The red and white roses were equal in beauty and fragrance, the only difference being in their color.

The chronicles of Saint Francis tell of a young friar who had the praiseworthy habit of saying the Crown of Our Lady (the Rosary) every day before dinner. One day for some reason or other he did not manage to say it. The refectory bell had already been rung when he asked the Superior to allow him to say it before coming to the table, and having obtained the permission he withdrew to his cell to pray.

After he had been gone a long time the Superior sent another Friar to fetch him, and he found him in his room bathed in a heavenly light facing Our Lady who had two angels with her. Beautiful roses kept issuing from his mouth at each Hail Mary; the angels took them one by one, placing them on Our Lady's head, and she smilingly accepted them.

Finally two other friars who had been sent to find out what happened to the first two saw the same lovely scene, and Our Lady did not go away until the whole Rosary had been said.

So the complete Rosary is a large crown of roses and the Rosary of five decades is a little wreath of flowers or a small crown of heavenly roses which we place on the heads of Jesus and Mary. The rose is the queen of flowers, and so the Rosary is the rose of all devotions and it is therefore the most important one.

St. Louis Marie De Montfort, Secret of the Rosary
Posted by Stanley at 23:50