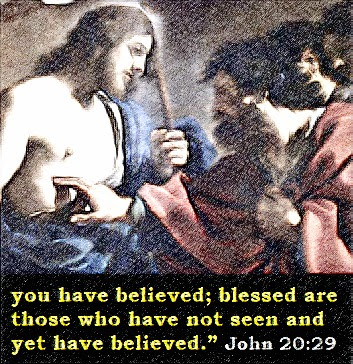 St.Thomas was on of the twelve disciples of Jesus, He earn the name "Doubting Thomas" due his disbelief about the resurrection of Jesus as in today's Gospel of John below. St.Thomas preached and founded early churches in Palestine, Mesopotamia, Parthia, Ethiopia and finally India. Preaching the Gospel earned Thomas a martyr’s death in 72AD at the Indian city of Meliapur (Mylapore), where he was stab by a spear (lance). Jesus’ spear wounds were the evidence Thomas needed to believe, but Thomas’ spear wounds are the evidence of his faith.

Grant, almighty God, that we may glory in the Feast of the blessed Apostle Thomas, so that we may always be sustained by his intercession and, believing, may have life in the name of Jesus Christ your Son, whom Thomas acknowledged as the Lord. Who lives and reigns with you in the unity of the Holy Spirit, one God, for ever and ever. Amen.

John 20:24-29
Thomas, called Didymus, one of the Twelve,
was not with them when Jesus came.
So the other disciples said to him, “We have seen the Lord.”
But Thomas said to them,
“Unless I see the mark of the nails in his hands
and put my finger into the nailmarks
and put my hand into his side, I will not believe.”
Now a week later his disciples were again inside
and Thomas was with them.
Jesus came, although the doors were locked,
and stood in their midst and said, “Peace be with you.”
Then he said to Thomas, “Put your finger here and see my hands,
and bring your hand and put it into my side,
and do not be unbelieving, but believe.”
Thomas answered and said to him, “My Lord and my God!”
Jesus said to him, “Have you come to believe because you have seen me?
Blessed are those who have not seen and have believed.”