John, the Lord’s forerunner is born
six months prior to the birth
of our Lord and Saviour Jesus Christ. 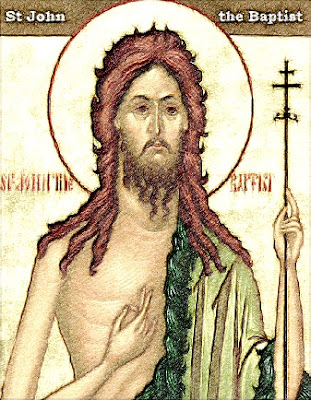 God has brought John,
the greatest of prophets,
to prepare the way of the Lord.
His call to repentance and baptism
formed a faithful remnant
that awaited the coming of the Messiah.

The voice of one crying in the wilderness,
Prepare ye the way of the Lord,
make his paths straight.
~ Mark 1:3 ~

The Church normally celebrate feast day of saints to commemorate their death, their birth into Heaven but to this rule there are two notable exceptions, the birthdays of Blessed Virgin Mary and of St. John the Baptist. In Luke 1:41-42, when Elizabeth heard Mary’s greeting, the child leaped in her womb. And Elizabeth was filled with the Holy Spirit and exclaimed with a loud cry, “Blessed are you among women, and blessed is the fruit of your womb. John was completely healed of sin in Elizabeth womb, therefore born without Original Sin, and he was then free of any serious sin throughout his life.

Grant, we pray, almighty God, that your family may walk in the way of salvation and, attentive to what Saint John the Precursor urged, may come safely to the One he foretold, our Lord Jesus Christ, Who lives and reigns with you in the unity of the Holy Spirit, one God, for ever and ever. Amen.

When the time arrived for Elizabeth to have her child
she gave birth to a son.
Her neighbors and relatives heard
that the Lord had shown his great mercy toward her,
and they rejoiced with her.
When they came on the eighth day to circumcise the child,
they were going to call him Zechariah after his father,
but his mother said in reply,
“No. He will be called John.”
But they answered her,
“There is no one among your relatives who has this name.”
So they made signs, asking his father what he wished him to be called.
He asked for a tablet and wrote, “John is his name,”
and all were amazed.
Immediately his mouth was opened, his tongue freed,
and he spoke blessing God.
Then fear came upon all their neighbours,
and all these matters were discussed
throughout the hill country of Judea.
All who heard these things took them to heart, saying,
“What, then, will this child be?”
For surely the hand of the Lord was with him.
The child grew and became strong in spirit,
and he was in the desert until the day
of his manifestation to Israel.

Past Posting
The Nativity of Saint John the Baptist (Solemnity) - 2013
Posted by Stanley at 22:44