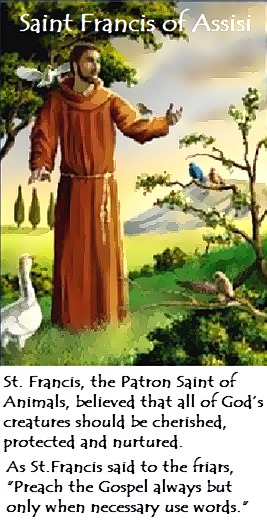 Saint Francis, founder of the Franciscan Order, born as Giovanni di Pietro di Bernardone (known as as Francesco) at Assisi, Umbria in the circa of 1181 or 1182. Francis was a man of action and his simplicity of life extended to ideas and deeds. Humility was, no doubt, his ruling virtue. Francis wrote the beautiful Canticle of the Sun that expresses his brotherhood with creation in praising God. In the canticle, Francis refers to the sun, wind, air, and fire as his brothers, and to the moon, stars, earth, water, and death as his sisters. He died on 4 October, 1226 at the age of 45. Saint Francis is the patron saint of animals, merchants and the natural environment. Each October, many animals the world over are blessed on his feast day.

Canticle of the Sun
Most High, all-powerful, all-good Lord,
All praise is Yours, all glory, all honour and all blessings.

To you alone, Most High, do they belong,
and no mortal lips are worthy to pronounce Your Name.

Praised be You my Lord with all Your creatures,
especially Sir Brother Sun,
Who is the day through whom You give us light.
And he is beautiful and radiant with great splendour,
Of You Most High, he bears the likeness.

Praised be You, my Lord, through Sister Moon and the stars,
In the heavens you have made them bright, precious and fair.

Praised be You, my Lord, through Brothers Wind and Air,
And fair and stormy, all weather's moods,
by which You cherish all that You have made.

Praised be You my Lord through Sister Water,
So useful, humble, precious and pure.

Praised be You my Lord through Brother Fire,
through whom You light the night and he is beautiful and playful and robust and strong.

Blessed are those who endure in peace,
By You Most High, they will be crowned.

Praised be You, my Lord through Sister Death,
from whom no-one living can escape. Woe to those who die in mortal sin! Blessed are they She finds doing Your Will.

No second death can do them harm.
Praise and bless my Lord and give Him thanks,
And serve Him with great humility.
Posted by Stanley at 04:20