Ready to receive the kingdom of heaven 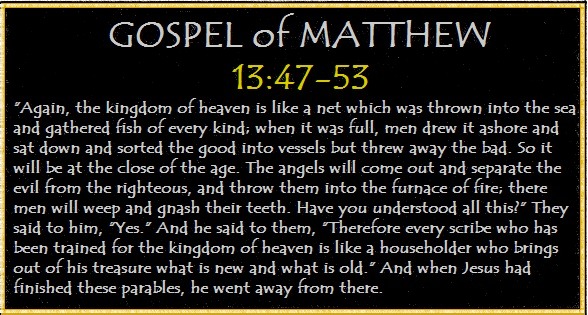 What can a story of a dragnet and a great catch of fish tell us about God's kingdom? The two most common ways of fishing in Jesus' time was with a casting-net (or hand-net) which was thrown from the shore and the drag-net or trawl which was let down or cast into the waters from a boat. As the boat moved through the waters the dragnet was drawn into the shape of a great cone which indiscriminately took in all kinds of fish and flotsam and jetsam swept in its path. It usually took several men to haul such a net to shore.

Reward and judgment at the end of the age
What is Jesus' point here? Just as a drag-net catches every kind of fish in the sea, so the church acts as God's instrument for gathering in all who will come. Just as the drag-net does not or cannot discriminate, so the church does not discriminate between the good and the bad, the useless and the useful. God's kingdom is open to all who will accept and believe. But there will come a time of separation, at the close of the age, when the angels will send the good and the bad to their respective destinations. Our duty is to gather in all who will come.

God, in the end of this age, will give the good (those who accept God's word and obey it) and the bad (those who reject God and his word) the reward they deserve. God offers the treasure of his kingdom to all who believe in him and who accept his only begotten Son, the Lord Jesus Christ as their Savior. Do you hunger for God and for his everlasting kingdom of righteousness, peace, and joy?

Trained for the kingdom of heaven
What is the point of Jesus' parable about a "scribe who has been trained for the kingdom of heaven" (Matthew 13:52)? Scribes were specially devoted to the study and practice of God's word entrusted to Moses (the first five books of the Bible) and in instructing others in how to live according to it. In the Old Testament Ezra was called "the ready scribe of the law of the God of heaven" (Book of Ezra 7:6,21). He received this title because he "had prepared his heart to seek the law of the LORD, and to do it, and to teach in Israel statutes and judgements" (Ezra 7:10). Ezra's heart was set on the kingdom of heaven because he revered God's word and he taught others through example and instruction to love and obey God's word.

The old and new treasure of God's word
Why does Jesus compare a "trained scribe" with a "householder who brings out of his treasure what is new and what is old" (Matthew 13:52)? Some people love to store up old prized possessions along with their newly acquired prizes. Others are eager to get rid of the old to make room for the new. So why does Jesus seem to emphasise keeping the old along with the new? Why not replace the old, especially if the new seems to be better or more useful? Wouldn't a person want to throw away an old pair of shoes and replace them with a new pair - especially if the old pair became well-worn or torn beyond repair? But, who in his right mind would throw away an old precious jewel or some old gold coins simply because they were ancient and maybe tarnished a bit? Precious gems and gold do not lose their value with age! Like choice vintage wine they increase in value.

Jesus' parable of the "old" and the "new" certainly points to the "older covenants" which God made with his covenanted people of the Old Testament, beginning with Abraham, Isaac, and Jacob, and with Moses on Mount Sinai, and with King David - the precursor of the Messiah (Psalm 89:3 and Psalm 110:1). Jesus' parable also points to the "new covenant" which he came to establish through the shedding of his blood on the cross and the anointing of his Holy Spirit who seals the new covenant on the day of Pentecost. Jesus did not come to abolish the Old Covenant but to fulfill it. The Lord calls us to treasure all of his word - all of his commandments, promises, precepts, and teaching (Psalm 119:14,72,127,162). Do you promise to keep all of God's commands? The Lord gives strength, blessing, and joy to those who treasure all of his word.

"Lord Jesus, may your word take deep root in my heart and transform my way of thinking, discerning, and acting. May your Spirit open my ears to hear and understand the word of God in the Scriptures that I may revere and treasure both the Old and the New Testaments which God has prepared for all who desire to enter his kingdom of righteousness, peace, and joy. Help me to be a diligent student and faithful disciple of your word."