The woman who took heart in Jesus 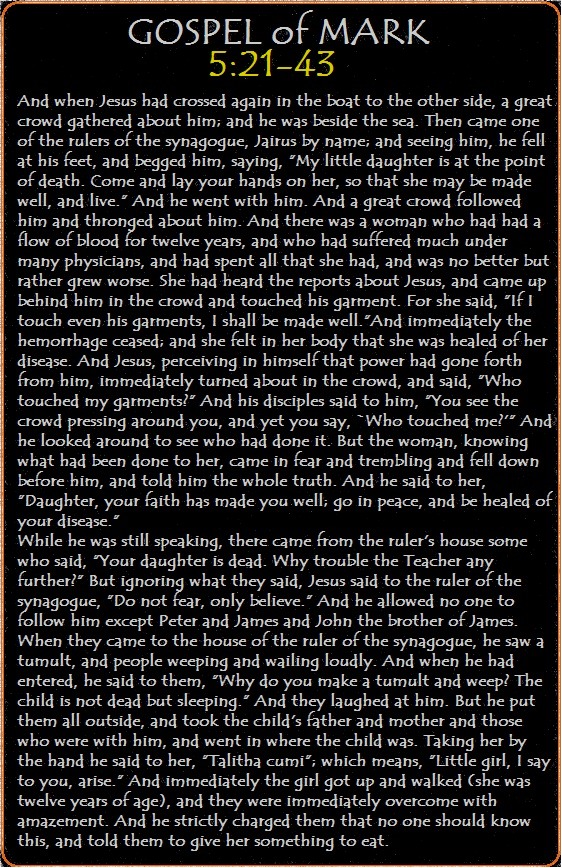 Do you approach the Lord Jesus with expectant faith or with skeptical doubt? People in  were not disappointed when they sought Jesus out. What drew them to Jesus? Was it hope for a miracle or a word of comfort in their affliction? What did the elderly woman who had suffered miserably for twelve years expect Jesus to do for her? And what did a grieving father expect Jesus to do for his beloved daughter who was at the point of death? Jesus gave hope where there seemed to be no human cause for it because his hope was directed to God. He spoke words of hope to the woman ( Take heart, daughter!) to ignite the spark of faith in her ( your faith has made you well!).

Ephrem the Syrian (306-373 AD), an early church Scripture scholar and author of hymns and commentaries, reflected on the miracle of the woman who was healed of her flow of blood:
"Glory to you, hidden Son of God, because your healing power is proclaimed through the hidden suffering of the afflicted woman. Through this woman whom they could see, the witnesses were enabled to behold the divinity that cannot be seen. Through the Son's own healing power his divinity became known. Through the afflicted women's being healed her faith was made manifest. She caused him to be proclaimed, and indeed was honored with him. For truth was being proclaimed together with its heralds. If she was a witness to his divinity, he in turn was a witness to her faith... He saw through to her hidden faith, and gave her a visible healing."

Jesus also gave supernatural hope to a father who had just lost a beloved child. It took considerable courage and risk for the ruler of a synagogue to openly go to Jesus and to invite the scorn of his neighbors and kin. Even the hired mourners laughed scornfully at Jesus. Their grief was devoid of any hope. Nonetheless, Jesus took the girl by the hand and delivered her from the grasp of death. Peter Chrysologus (400-450 AD), an early church father who was renowned for his preaching at Ravena, comments on this miracle:
"This man was a ruler of the synagogue, and versed in the law. He had surely read that while God created all other things by his word, man had been created by the hand of God. He trusted therefore in God that his daughter would be recreated, and restored to life by that same hand which, he knew, had created her... He [Jesus] who laid hands on her to form her from nothing, once more lays hands upon her to reform her from what had perished."

In both instances we see Jesus' personal concern for the needs of others and his readiness to heal and restore life. In Jesus we see the infinite love of God extending to each and every individual as he gives freely and wholly of himself to each person he meets. Do you approach the Lord with confident expectation that he will hear your request and act?

Lord Jesus, you love each of us individually with a unique and personal love. Touch my life with your saving power, heal and restore me to fullness of life. Help me to give wholly of myself in loving service to others.

source: From the desk of Don Schwager,
hosted by Kairos Europe and the Middle East