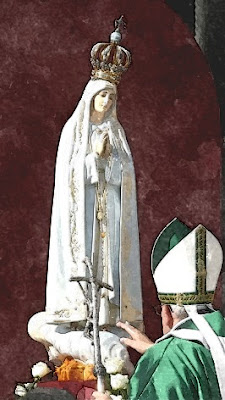 On 7 October 2016 in his speech, Pope Francis noted from the earliest centuries of the Church, Mary has been invoked as the “Mother of Mercy,” explaining that the prayer of the rosary in many ways is a “synthesis of the history of God’s mercy, which becomes a history of salvation for all who let themselves be shaped by grace.”

Mary guides us toward the path we are called to take “in order to be true disciples of Jesus,” said Pope Francis, adding that in praying the rosary, we feel her closeness in each mystery and contemplate her role as “the first disciple of her Son, for she does the Father’s will. He also stressed that Mary can help teach us what it means to be a disciple of Christ, because while she was “eternally chosen to be his Mother,” she also learned how to be his disciple.

“The disciple truly puts his life at the service of the Gospel,” he said, and, recalling Mary’s own actions, pointed to how after the Annunciation, Mary immediately went to her cousin Elizabeth to help her during her pregnancy.

Not only did she then give birth to the Son of God, but she also showed her concern for the young spouses in Cana by interceding for them. When Jesus was crucified on Golgotha, Mary “did not flee pain but stood beneath the cross of Jesus and, by his will, became the Mother of the Church.”

After Jesus rose from the dead, she then “encouraged the apostles assembled in the upper room as they awaited the Holy Spirit, who would make them fearless heralds of the Gospel,” Pope Francis said.

"We fly to your protection, holy Mother of God. Scorn not our petitions in the hour of need. O glorious and blessed Virgin, deliver us always from every peril."

Extracted from source: cruxnow
Posted by Stanley at 00:16