The feast is celebrated in honouring and as a memorial to the Apostle St. James the Greater.

James is the older brother of John, who are the sons of Zebedee. They were called by Jesus to be His disciples. James and his brother John were given the name Boanerges which means “Sons of thunder” (Mark 3:17) this is because in Luke 9:54 that they wished to call down fire from heaven on the Samaritans when they did not make Jesus welcome. James together with Peter and John were the only apostles present in three special events with Jesus, the raising of Jairus’ daughter (Mark 5:37; Luke 8:51), Jesus’ Transfiguration (Matthew 17:1-2; Luke 9:28-29), and they were with Jesus during his agony in Garden of Gethsemane (Matthew 26:36-37).

James was martyred with a sword (Acts 12:1-2) in Jerusalem by the order of Herod. James was buried within the Cathedral de Santiago de Compostela, Spain. Just as James did with his brother John, therefore we too need to be obedient and without delay answer to the invitation of Jesus and follow Him. 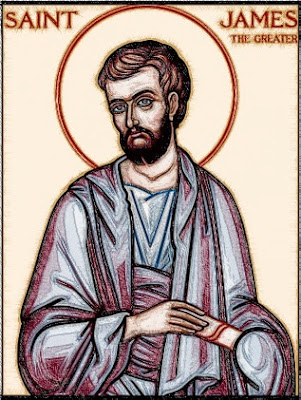 Matthew 20:20-28
The mother of the sons of Zebedee approached Jesus with her sons
and did him homage, wishing to ask him for something.
He said to her,
“What do you wish?”
She answered him,
“Command that these two sons of mine sit,
one at your right and the other at your left, in your Kingdom.”
Jesus said in reply,
“You do not know what you are asking.
Can you drink the chalice that I am going to drink?”
They said to him, “We can.”
He replied,
“My chalice you will indeed drink,
but to sit at my right and at my left, this is not mine to give
but is for those for whom it has been prepared by my Father.”
When the ten heard this,
they became indignant at the two brothers.
But Jesus summoned them and said,
“You know that the rulers of the Gentiles lord it over them,
and the great ones make their authority over them felt.
But it shall not be so among you.
Rather, whoever wishes to be great among you shall be your servant;
whoever wishes to be first among you shall be your slave.
Just so, the Son of Man did not come to be served
but to serve and to give his life as a ransom for many.”
Posted by Stanley at 22:31