The Lord had compassion on her 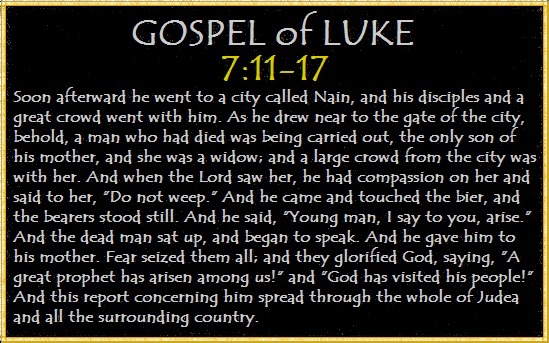 How do you respond to the misfortunes of others? In a number of places the Gospel records that Jesus was "moved to the depths of his heart" when he met with individuals and with groups of people. Our modern use of the word "compassion" doesn't fully convey the deeper meaning of the original Hebrew word which expresses heart-felt "sympathy" and personal identification with the suffering person's grief and physical condition. Why was Jesus so moved on this occasion when he met a widow and a crowded funeral procession on their way to the cemetery? Jesus not only grieved the untimely death of a young man, but he showed the depth of his concern for the woman who lost not only her husband, but her only child as well. The only secure means of welfare in biblical times was one's family. This woman had lost not only her loved ones, but her future security and livelihood as well.

Jesus is lord of the living and the dead
The Scriptures make clear that God takes no pleasure in the death of anyone (see Ezekiel 33:11) - he desires life, not death. Jesus not only had heart-felt compassion for the widow who lost her only son, he also had extraordinary supernatural power - the ability to restore life and to make a person whole again. Jesus, however, did something which must have shocked the sensibilities of the widow and her friends. Jesus approached the bier to make physical contact with the dead man. The Jews understood that contact with a dead body made oneself ritually unclean or impure. Jesus' physical touch and personal identification with the widow's loss of her only son not only showed the depths of his love and concern for her, but pointed to his desire to free everyone from the power of sin and moral corruption, and even death itself. Jesus' simple word of command - "Young man, arise" - not only restored him to physical life, but brought freedom and wholeness to his soul as well as his body.

The Lord Jesus has power to restore us to wholeness of life - now and forever
This miracle took place near the spot where the prophet Elisha raised another mother's son back to life again (see 2 Kings 4:18-37). Jesus claimed as his own one whom death had seized as its prey. By his word of power he restored life for a lad marked for death. Jesus is Lord not only of the living but of the dead as well. When Jesus died on the cross for our sins he also triumphed over the grave when he rose again on the third day, just as he had promised his disciples. Jesus promises everyone who believes in him, that because he lives (and will never die again), we also shall have abundant life with and in him both now and forever (John 14:19). Do you trust in the Lord Jesus to give you abundant life and everlasting hope in the face of life's trials, misfortunes, and moments of despair?

"Lord Jesus, your healing presence brings life and restores us to wholeness of mind, body, and spirit. Speak your word to me and give me renewed hope, strength, and courage to follow you in the midst of life's sorrows and joys."